Autumn has arrived.  Recently, we have had some glorious spells of hot summer and the garden has never looked better…not, I hasten to add, because of my own efforts, but because of the diligent and skillful care of Mary, my gardening friend. Not only does the back and front of the house look splendid, but with the addition of a few feeders, birds have flocked in…dunnocks by the dozen, sparrows, starlings, robins, blackbirds, magpies. I’ve even seen a goldfinch and a collared dove as well as a bevy of blue-tits…and of course the almost resident wood pigeons. What came as a shock was the sudden appearance of a sparrow hawk who dramicatcally attacked and carried off a dunnock.

The conference season is upon us. Needless to say, I have little time for the political shenanigans of party conferences; however, this year I will be giving a key note speech at the Take Pride in Ageing Conference in Chester Town Hall. This is the third such conference organised by Body Positive Cheshire and North Wales. The one I attended last year was really good…but lacked one important thing…a positive voice. Perhaps I should have kept my mouth shut, but I couldn’t restrain myself from pointing out this omission…so that’s why I now find myself preparing to give a twenty minute talk as an openly gay man ageing with HIV. It’s a tough challenge: how do you condense 78 years of work, play, adventure and activism into a 20 minute slot? Something that  influenced my approach was Gareth Thomas coming out as a person living with HIV

No one should feel pressured to disclose their status because of fear. Gareth has my total support and understanding…I can remember back in the 80s I too kept my head down and my status secret, at that time to have done otherwise would have been madness given the stigma and hysteria around HIV and AIDS. Thankfully, we have moved on from those dark times of  ignorance, a person living with HIV on current treatment will have their virus under control and be able to live as long as anyone else.

Health professionals and people living with HIV like me, have known for many years that those on effective treatment don’t pass on the disease. However, the PARTNER study provides the scientific evidence to support this fact.  What are the implications of its findings?

The results from the PARTNER studies in addition to evidence from other studies in serodifferent couples indicate that the risk of transmission of HIV through condomless sex in the context of virally suppressive ART is effectively zero for both gay men and heterosexual couples. These results support the U=U (undetectable equals untransmittable) message, as well as promoting the benefits of early testing and treatment. (The Lancet online)

Friday 13 September I turned 78. As usual, the day was pleasant but unremarkable apart from an amusing incident in the Potbank Cafe at Spode Works. I was introduced by a black priest, half my age, that I knew to an older white writer of poetry who was fascinated by my recent visit to Ankor Wat in Cambodia. He was a fan of Alan Ginsberg who had experienced an epiphany moment when he encountered extreme poverty at Ankor Wat. Whilst his story was entertaining …it was what followed next that took my breath away. When asked how we knew each other… without batting an eyelid came the reply …

When I returned home, my brother and sister-in-law rang to sing ‘happy birthday’…They get better every year.

On Sunday, Scott came over bringing cards and lots of lovely presents before treating me to a delicious lunch at the Wayfarer Inn. One present, a fabulous potted stargazer lilly plant gave me enormous joy for over a week as the buds gradually burst, filling the house with a heavenly perfume.  Guess I’m a very lucky guy. 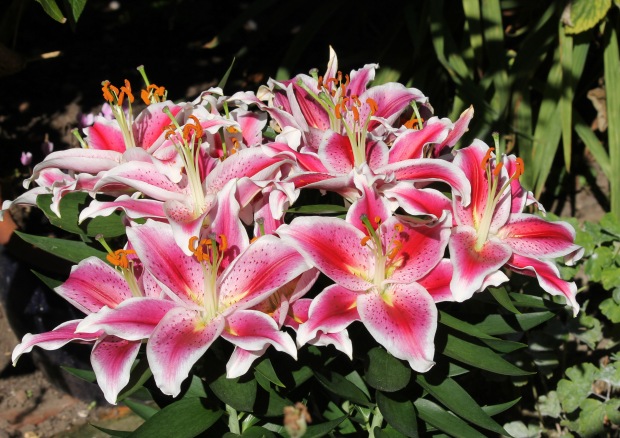 Tomorrow, Ages & Stages Theatre Company begin intensive rehearsals to create a piece of theatre to be performed on Friday of the Live Age Festival at the New Vic Theatre. We are working with a guest director Bryn Holding who has already sparked our enthusiasm with a fun workshop last Monday. Before Live Age, there is the Take Pride in Ageing Conference at Chester Town Hall mentioned at the start of this blog. We’ll see how it goes before I decided if a separate posting is in order.