According to ‘experts’ jet lag is less terrible when flying west because that direction adds hours to our days, giving our bodies more time to adjust. For me, it’s quite the opposite. Maybe it is because I am returning home from summer warmth to dark,cold winter, or my circadian cycles are wired in the wrong direction. Whatever the reason, it normally takes me days after returning home before I feel anything like human. This year I tried an experiment…I would make the return journey by business class to give me a chance to sleep. It wasn’t possible to upgrade just the final leg of my RWT (round the world ticket), but business class for the flights from Auckland onward was.

The hop from Auckland to Sydney made little difference, but the flight from Sydney to Manila on an Airbus A330-300 certainly did. At the press of a button my seat turned into a bed…I was able to get decent periods of sleep. Unfortunately, I made the mistake of trying to put travel socks over my bandaged ankle. I succeed in getting the socks on…but had created ridges with the bandage in the process. Whilst I was asleep, these acted like tight rubber bands on my swollen foot. I woke up in agony…but there was nothing I could do apart from massaging the painful areas until Manila. The bandages needed scissors to remove them…and as everyone knows such sharp objects are banned from cabin baggage…no matter what class. One of the perks of business class is that your hold luggage is given priority…so I was able to collect my bag almost as soon as arriving at the carousel. What a relief!

Sunset happens quickly in the Tropics…we landed in daylight…by the time I had sorted out a taxi…it was dark. Traffic into the city was heavy, but Philippine drivers seemed a little less aggressive than in Vietnam. Although there were plenty of two-wheeled vehicles, they were far less prominent…instead there was a new traffic danger – the Jeepney.

Jeepneys are the most common form of public transport throughout the Philippines. In Manila they are so numerous, there is almost  constantly traffic congestion. The jeepneys don’t have air-conditioning – they have open windows. Most of the time the jeepneys are over-packed. They offer one of the cheapest ways of getting somewhere…but seldom have  a special place to stop – the drivers slow down enough to enable the passengers to jump on or out. With my reduced agility…travel by jeepney was not an option!

Bahay Kubo Hostel in Maria Orosa Street, is a well situated friendly place with very helpful staff…even if I did have to improvise curtains from towels for privacy in my individual room. In the morning I was woken by the sounds of drums and people marching. The hostel owner explained that it was a parade to welcome me! In fact it was a ‘Walk For Care’ showing solidarity of community concern and respect for the environment.  Admirable! 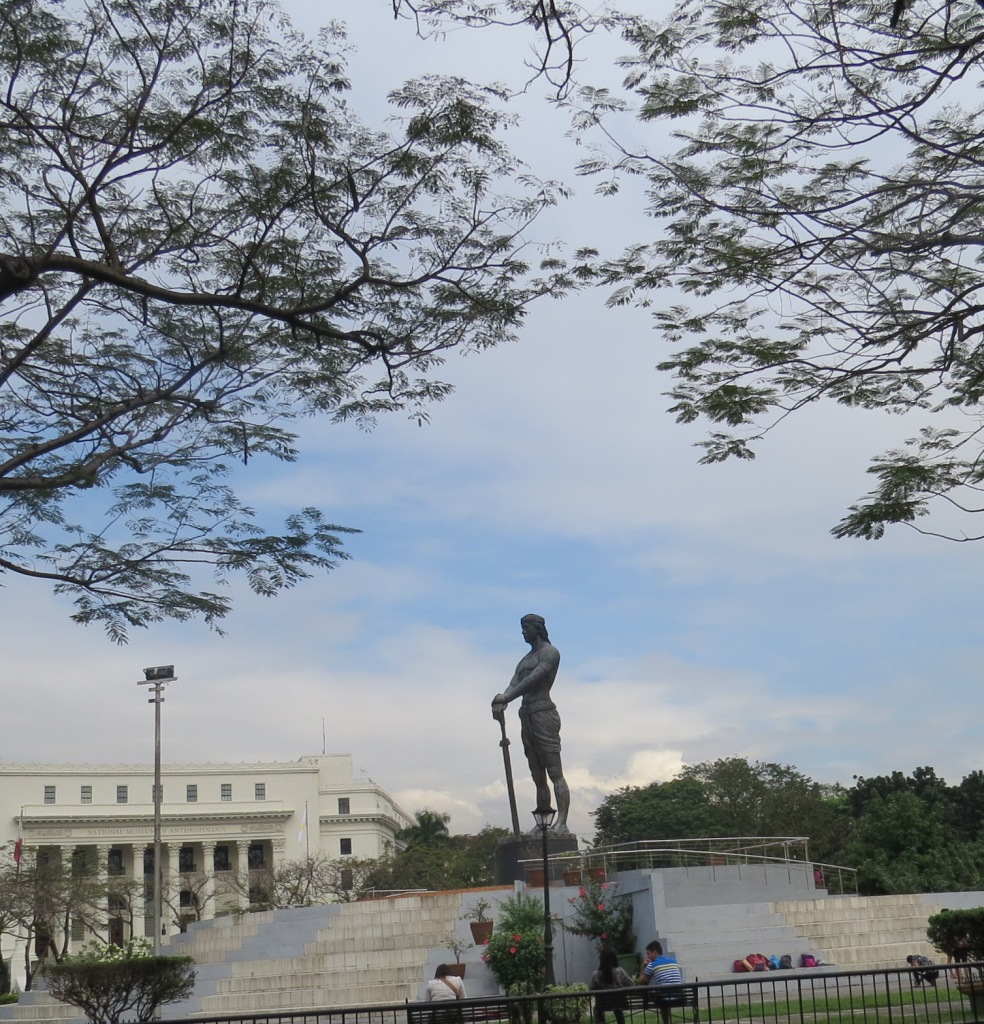 The hostel was in a busy part of the city close to bars, restaurants, and museums. Rizal Park lies the other side of Robinson Place…a huge retail mall that has security checks at its entrances…but worth the bag-search hassle for its air conditioning and cornucopia of retail outlets and eateries.  I explored one side of Rizal Park on Thursday, discovering groups of young people doing physical exercises and dance routines. It would seem that parks in Manila are just as well used by all ages of people as they were in Saigon. I got as far as the National Museum…well worth visiting…and free!

Friday I strolled on the other side of Rizal Park, taking me past the outdoor amphitheatre and Chinese Garden. I was impressed to find an area dedicated to senior citizens…who also have a special line at airports giving them the same treatment as VIPs…which of course, is only right and proper. Finally, I reached the walls of the old city, which is remarkably well-preserved – or more likely well-restored given that Manila was the most bombed city in World War II, second only to Warsaw. The cathedral interior is almost entirely new, but the church of San Agustin seems to have survived much better…its most serious damage appears to have been the loss of one of its towers in the strong earthquakes of 1880.

I could have spent much longer wandering the fascinating old city of Intramuros, but considered the welfare of my injured leg should take priority…and so took a taxi to the Robinson Mall for tasty Filipino evening meal and an early final night in Manila.