There can be no question that 2018 has kept me well occupied. Flying back from the other ..side of the planet business class, meant that I suffered less jet-lag and was in a better position to hit the ground running. Within a week I was back in harness playing the organ and rehearsing singers at Holy Trinity Burslem for Candlemas… I attended an Ages & Stages Theatre Company workshop and meeting… and was getting to grips with the new field of creating pottery at the first Ceramics Workshop with the LGBT Older People’s Group under the inspirational guidance of Jo Ayres and Alice Thatcher.

Pressure of commitments prevented me from attending all but one of the NLTSG residential weekends for Long Term HIV Survivors. Staffordshire Buddies had lost all of its statutory funding because of the Government cutbacks…so additional time and effort were needed all round.

Thankfully, many of the commitments were enjoyable and well worthwhile. Roland Chesters’ book launch in London springs to mind…similarly the LGBT Prejudice to Pride Conference in Chester Town Hall…not to mention the Prides I attended… with Stoke’s Pride in Hanley Park topping the list.

Book launch of Roland Chesters’ Ripples From the Edge of Life to which I contributed a section. May 2018

Meet Me At Live Age – a two year programme arising from the Live Age Festivals in Stoke and North Staffordshire – linked professional artists with local community groups. As a Live Age ‘ambassador’ I was fortunate to work alongside Rachel (dance), Jo and Alice (ceramics, Mika (Brazilian dance and drumming). I thoroughly enjoyed assisting the artists and encouraging workshop participants. Engaging with people living with dementia at the Grocott Centre in Fenton…was a truly enlightening and inspiring experience. Meeting up and working alongside people I knew from my time as organist at St John’s Trent Vale was a real joy.

Regular organ and piano practice has led to an overall improvement in the standard of my performance and ability to respond to out of the ordinary requests, like a specific pieces by Bach or Mendelsohn at a funeral or an improvised organ arrangement of The Marriage of Figaro Overture by Mozart.  Hours of academic study with online university courses resulted in Certificates of Achievement in

FOOD FOR THOUGHT: THE RELATIONSHIP BETWEEN FOOD,GUT AND BRAIN

Both courses had stimulating content, but just as important was the interaction with fellow course participants which was always enlightening, seldom annoying and often very amusing.

In January, when I agreed to move to another hotel in Hanoi Vietnam so that my double room could be used by a family…never did I imagine it would be on the back of a motorbike. Fortunately, I had gotten to know the young driver who was a hotel employee…and had every confidence in his ability to navigate the treacherous Hanoi traffic to get me to the other hotel safely. My trust was not misplaced.

At the other end of the year on the fourth Sunday in Advent, Fr Brian asked all the congregation to meet in the Parish Hall after mass. To my astonishment, the PCC had arranged a presentation in my honour…a specially baked cake with a picture of the organ case on top and a very generous gift to say thank you. I have been resident organist for 24 years…next year will mark a quarter of a century and time for me to retire? 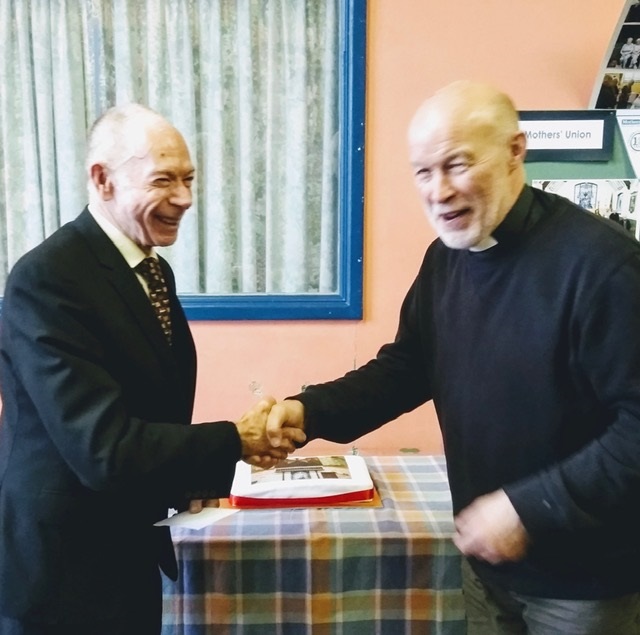 My bags are packed, I’ve checked in online and have boarding cards for connecting flights to Dubai and Phnom Penh… my first trip to Cambodia. Adelaide in Australia is next…then Auckland New Zealand…and finally Ho Chi Minh City Vietnam. This morning I thought I wouldn’t be able to go…I couldn’t find my passport to check in online. Having searched everywhere…including the rubbish bin…I discovered it filed away inside the folder where I had put it for safety. What a relief!